I was teaching in Amsterdam last weekend and stayed in a wonderfully quirky hotel The Lloyd (www.lloydhotel.com). It boasts that each room is different. Well mine certainly was different from any I have stayed in before. It was essentially a large industrial style kitchen, with the bedroom as a cupboard!

The Lloyd hotel is a fascinating building on the waterfront in the Eastern Docklands area of Amsterdam. It was originally a hostel for the migrants who were fleeing from Europe to South America on one of the Royal Dutch Lloyd ships. Later it was a refugee centre for Jews hiding from the pogroms(attacks) and, during the war, the Nazis turned it into a prison. After the war it became a youth detention centre before becoming artist studios.

It still retains its cultural links, serving as a space for exhibitions and installations. Every space is a living work of art and there are conference spaces and libraries. In fact it calls itself not just a hotel but a cultural embassy.

As I sat in my kitchen, with its enormous sink, and industrial tiles on the floor and walls, I pondered over the stories of the many people who have passed through this building. How they would have felt, their pain and suffering and hope. There were exhibitions in the hotel following some of these stories. “My” kitchen was not a very comfortable place to rest. Even though there was a huge chandelier, the stairs over which it hung didn’t lead to anywhere other than a locked door. On the way down the stairs there was a door which opened into a cavernous dark space. A friend I was showing round teased me about there being dead bodies hidden away. 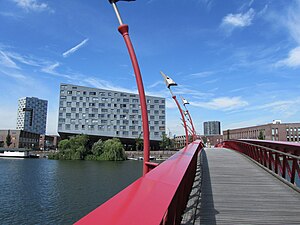 Modern architecture in the Eastern Docklands of Amsterdam. View north towards Sporenburg from the bridge for pedestrians and bicyclists across the Spoorwegbassin, connecting Borneo-eiland to Sporenburg. On the left is the apartment building The Whale. (Photo credit: Wikipedia)

But there are bodies everywhere, imprinting their memories. There are the bodies of the people who passed through “my” kitchen, perhaps cooking food for the juvenile prisoners, sharing their lives with each other. The Lloyd building is rich in memories because of its size and the fact that so many people have passed through, often at pivotal points in their lives. However every building holds memories of the lives of the people who have passed through their doors. We all recognise that in some places we get a “good” feeling and in other places we feel uncomfortable. If we pause and are still for long enough, we start to hear more. Perhaps that feeling of sadness as we walk through a door is not ours, but someone else’s.

Our bodies, like buildings, have their stories to tell. As we journey through life, our bodies hold the memories of our experiences. We are the stories of all the places and people we have ever been with: everything we live. Some of these we remember consciously, but many more are held on a more unconscious, or subconscious level, within our bodies.

On a simple level we know that if we are feeling happy and excited, our body experiences this physically and emotionally differently than if we are tense or uncomfortable. These feelings and postures vary from person to person but the next time we experience a similar feeling, we might repeat the posture or way of breathing. Over time these patterns can become fixed in the body. When we start paying our bodies more attention, perhaps through yoga, meditation or other forms of body work, we might find some of these patterns start to release. As they release, then some of the feelings associated with their creation may also be released.

We also hold within our bodies, memories of the time we spent in our mother’s womb. Usually these are only glimpsed at when we access our unconscious. Scientists have now begun to understand how much the mother influences the development of her baby through the way she is. We share her sensations, sounds, movements, breathing changes and her changing emotions. We share her body for a while and during this time we share her stories.

If we understand that all experiences are held in our body, then we realise that we are absorbing into our body, not just the current experiences of our mother, but her experiences before we came into her body. Then on some level we are sharing the stories of everyone our mother has connected with. There will of course be an especially powerful connection with her mother and her mother’s family. This is essence what the Chinese refer to as the Jing, our Essence, our ancestral inheritance.

If we start thinking of things like this we realise that we are infinitely linked to others. We cannot escape our history, but we always choose to change the story by working with our bodies and freeing up fixed patterns. Just as the Lloyd has passed through so much brutality and has ended up as a work of art and a place of rest and pleasure, so we too can transform the spaces in our bodies. And as we influence those around us, we can transform their spaces too!