I did this interview for the Berlin school for Zen Shiatsu when I taught there in 2016. Here is the text in English and German.

For the German link on the school pages please go to http://www.zen-shiatsu-schule.de/interview-mit-suzanne-yates-von-ulrike-schmidt–2016- 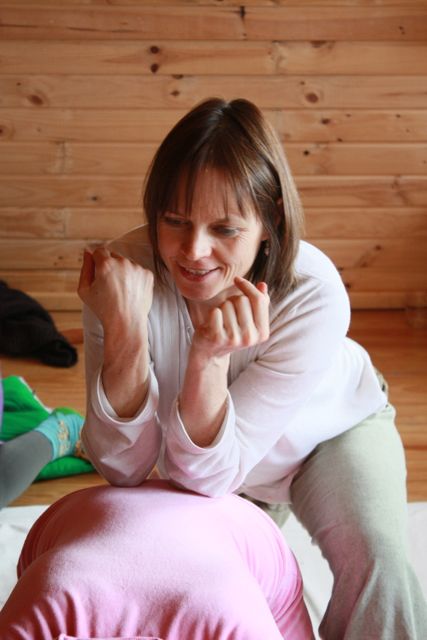 When did you get in touch with shiatsu ­­­­– was it already during your time as a student of modern languages?

My first experience with Chinese medicine was while I was still a student. I got a kidney infection while in my final year and, rather than going down the western medical route, decided to try herbs and then acupuncture. After a while of acupuncture, I decided to visit the shiatsu practitioner who was working in the same clinic. I then started receiving shiatsu and began doing beginners evening classes.

What was so fascinating for you that shiatsu became your profession…?

Initially I just loved studying about Chinese medicine, doing the exercises and meditations and receiving as well as giving shiatsu. I did it more as personal development. Each year I loved it so much I carried on studying. I first studied a year with Keith Phillips in Bristol but he was only running evening classes so I then began to study with Sonia Moriceau. When I finished the 3 year training I thought I might as well carry on and become a practitioner but I carried on studying with Sonia, doing postgraduate courses and eventually assisting her. I loved the study with Sonia as we did a lot of experiential work in the countryside, living the five elements. I also loved her inclusion of meditation as part of the study. I felt I gained a wonderful foundation to keep developing my work from my years of study with Sonia.

In 1990 you founded Well Mother. The reason and initial point for that were your own experiences during your first pregnancy. What did you miss…?

I felt that the shiatsu I received in my pregnancy was good as far as it went, but didn’t really address my specific needs as a pregnant woman. I saw Sonia regularly but missed specific connections with my baby, specific focus on preparing to be a mother. I did some additional studies in America with Elizabeth Noble, an obstetric physiotherapist, as I liked her approach and it helped support me with exercise in my pregnancy and prepare me for my birth.  I also felt that specific shiatsu support for my partner was missing and he and I set up specific birth preparation workshops in Bristol to address that need.

You do not only give workshops in Europe but also in the States and Australia. What is it that makes your work so unique, so special?

You would have to ask my students, but I think the answer is that I have focused so intensely on this subject since 1990 that I have built up a huge knowledge and experience. I teach not only shiatsu practitioners but also midwives as well and I have learnt a lot from working with midwives. I have sometimes run courses in hospitals and then worked with my midwife students with women in early labour. I also came to “discover” the Extraordinary Vessels through my intense work with pregnancy women. I felt a different kind of energy and realised this is what it was. The energy of the Extraordinary Vessels is very present in pregnant women and I nearly always work it in most sessions with them, but gradually over the years I have understood more about the Extraordinary Vessels in non pregnant clients and men as well. I now teach workshops just on the 8 Extraordinary Vessels. I now find that Shiatsu is not complete without including them. The next book I am working on is largely about the Extraordinary Vessels and how they develop from the moment of conception and how they change through our whole life. I have begun a series of blog posts on this subject.

What is your experience with the willingness of midwives to learn something special from the Traditional Chinese Medicine? And what about physicians/obstetricians in this respect?

Some midwives are very open: but of course not all! Often it is independent midwives or those who work in birth centres or who attend home births, but not always. Sometimes hospital midwives come. I started my work with British midwives who are quite open: but due to cuts in the NHS it is harder for them to get time off and their courses paid for. However in Belgium there is more interest now. I spoke at the Belgium midwives conference in 2010 and am speaking and presenting some practical workshops at the Flanders conference in May. One of my teachers has been continuing the workshops I began there in 2010. I have taught in France and now two of my teachers are teaching there. There is some interest from physicians/obstetricians but they rarely tend to come on my courses, although when I was running more regular birth preparation workshops in Bristol, they often came to those with their partners and enjoyed what they learnt. They often support the midwives to study.

Nowadays freelance midwives in Germany are faced with high sums they have to pay for their insurance. The amount is so high that they hardly have enough money for their living. For that reason many midwives gave up their jobs. Do you know how the situation presents itself in other EU-countries?

Yes, sadly this is the situation in England, where we had a long tradition of independent midwives. I know that the situation is also changing in the Netherlands too: it is harder for midwives. I think this is the situation in a lot of Europe. Also it is harder for midwives to practise in a more holistic way with all the demands of testing and monitoring and so on. In the UK many midwives are either going part time or leaving their jobs and beginning some training in complementary therapies like massage and shiatsu so they can use more of their core skills.

What about the situation in birth centres or midwife led units in England?

There are some new birth centres and midwife led units in the UK where midwives have more possibility to practice their core skills.

You accompany pregnant women and young mothers with shiatsu. Are you also with them during labour?

Not so often these days. I used to when I started my work in 1990, but since 1998 I have been doing a lot more teaching abroad and so I am not able to commit so much to supporting women in labour. It is a shame as it is a part of my work that I love… but one can’t do everything!

In your Well Mother Workshops in England you developed a massage diploma. Additionally there is  – after one has followed your workshops – a diploma for shiatsu and midwifery for shiatsu practioners. Where in Germany or Austria do you give further workshops?

I give further workshops at the Shambahla School in Vienna, Austria: the full diploma  course. This is where I started teaching abroad in 1999 and I have been going there twice a year since. In Germany I have started doing some of the modules at Wilfried’s school in Hamburg: there is one at the end of February. Students who study this weekend and want to study further can go there. I also teach the Diploma in Zurich at the Ko Schule. Please see the German pages of my website for more information

Your Well Mother Workshops are designed for midwives, obstetricians, shiatsu practitioners and massage therapists, but also for those without previous knowledge, hence my question, is it possible that the partners of pregnant women can also participate?

Yes of course. These are the birth preparation workshops which I am referring to. This is the material of my second book “Beautiful Birth”. This is how I started my maternity teaching and the courses that obstetricians and physicians attend. Again at the moment I am not running so many and tend to work one to one with couples, as I am very busy teaching workshops abroad. However, as I develop more on line teaching, I hope to do more partner workshops again but also to create some more on line resources for women and their partners.